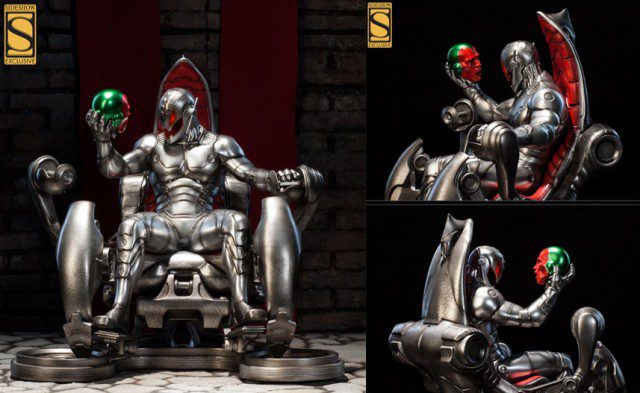 This is seriously one of the coolest comiquette’s I’ve seen in a while.

This piece brings the insane sentient robot to life!

This may become a limited edition piece.

The creation of Doctor Henry Pym (Ant-Man), Ultron is the textbook example of good intentions gone horribly wrong. Attempting to create a robot with a sentient mind, Dr. Pym used his own brain patterns as the foundation for Ultron’s programming. While he inherited Pym’s scientific genius, Ultron was unhindered by the binds of a human conscience, and his hatred for his ‘father’ and the rest of humanity manifested itself only moments after his activation.

A ceaseless enemy of the Avengers, Ultron is smart enough to know not to go into the fight alone. Ultron has had some famous team-ups with the Grim Reaper, King Pin, The Red Skull, and even created his own version of the Masters of Evil. Boasting an impressive skill set of superior intellect, superhuman strength, speed, durability, flight, and the power of hypnosis, Ultron is a true force to be reckoned with. He also has a remarkable sense of self-preservation, and keeps a number of spare bodies that can be activated upon his current form’s demise.

Ultron’s goal has changed over the course of his history. Originally content with just destroying humanity, a few bitter losses convinced Ultron that all organic life should be destroyed. After having his consciousness fused with Adam Warlock, his mind was changed yet again. Before being banished from earth, Ultron revealed his hopes to create the ultimate techno-organic life form; an artificial being with all the evolutionary strengths of both technology and humanity, and none of their weaknesses. No matter how often he is destroyed, two things are certain; Ultron always returns, and he always has a plan.

Available for order via the vendors below: