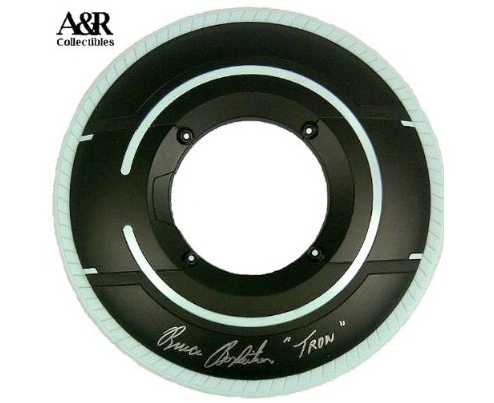 This is a standard Tron Legacy Identity Disc prop replica that has been privately autographed by Tron himself – Bruce Boxleitner!
Bruce has added the special inscription “TRON” next to his signature.

The disc comes with a Certificate of Authenticity and photo of Bruce signing.

Tron is a 1982 American science fiction film written and directed by Steven Lisberger, and released by Walt Disney Pictures. It stars Jeff Bridges in a dual role as the protagonist Kevin Flynn and one of his programs, “Clu”; Bruce Boxleitner in a dual role as security program Tron and Tron’s “User”, computer programmer Alan Bradley. Tron Legacy is Disney’s 2010 sequel to the 1982 hit.

At the time of posting this product there is only one signed disc, so you’ll have to hurry if you want to be sure of adding it to your list of Tron Legacy collectibles!