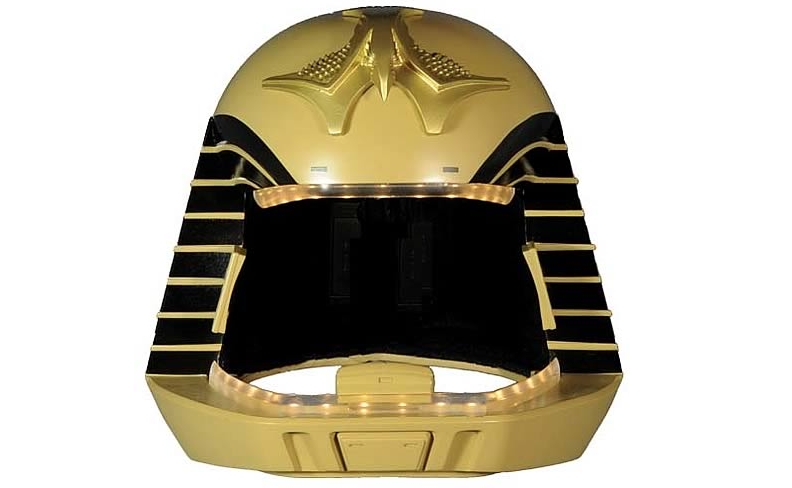 What do we mean by signature edition? In this case, the helmet is a dual-signature edition that includes both Richard Hatch’s and Dirk Benedict’s signatures on a special display plaque stand!

Limited edition of only 500 pieces. Each comes with a certificate of authenticity.

The original Colonial Viper pilot helmet was created in 1977 for a proposed 7-hour ABC mini-series by Glen A. Larson named Battlestar Galactica. The mini-series starred Lorne Greene, Richard Hatch (Apollo), and Dirk Benedict (Starbuck). The original concept sketches of the helmet were drawn by Joe Johnston, who was the Effects Art Director at MCA-57. Its Egyptian inspiration was likely due to the huge success of the “Treasures of Tutankhamun” exhibition (1972-1981) that was touring the United States. In fact, at the time of the start of pre-production, the exhibit was at the Los Angeles County Museum of Art. The helmet was made by MCA-57 model maker Steve Gawley, based on Johnston’s concept sketches and guidance. Early in the development of the helmet, Steve requested to fit the helmet to the actor with the largest head. But this was not possible since in 1977, the roles had not yet been cast. So, he recruited some of his fellow artisans at MCA-57 to try the helmet on for size. The goal was to make one size helmet to fit all.

The series pilot first aired on September 17, 1978. Many of the original helmets were subsequently repurposed for the short-lived Galactica 1980 television series and the Universal Studios Hollywood attraction “Battle of Galactica” (1979-1992).