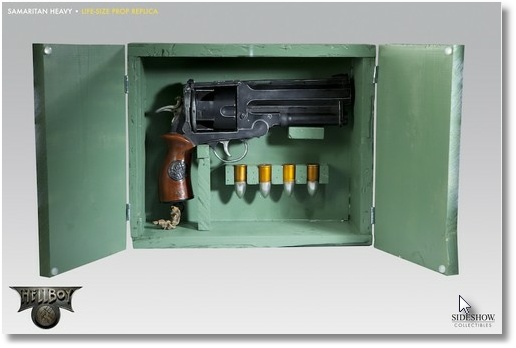 This prototype was fashioned after the awesome weapon used by Ron Perlman’s Hellboy character from the movie of the same name. However, this unique version of the prop was made out of solid white metal weighing in at approximately 13 pounds.

Cool ‘Behind the Scenes fact: Sideshow assisted in the creation of the original Samaritan ‘beauty’ prop used on set as well as the bullet packaging that appears in ‘Red’s’ ammunition trunk!

Although this heavier white metal prototype was never used in the movie because of its weight, Ron Perlman did hold it on set. Sideshow Collectibles decided not to use the all ‘white’, heavier metal material in our final edition of this prop replica, opting instead for more light-weight, mixed media materials to insure easier handling and display for our collectors..

This heavy, white metal prototype comes with four prop bullets that weight in at approximately ½ pound each, along with a wooden shadow display box fashioned to look like the B.P.R.D supply crates as seen in the film. It will be packed in a shipper carton and protective packing materials by our production team and also include a Certificate of Authenticity.

All proceeds from these unique auctions will go to local cancer causes and national children’s charities!