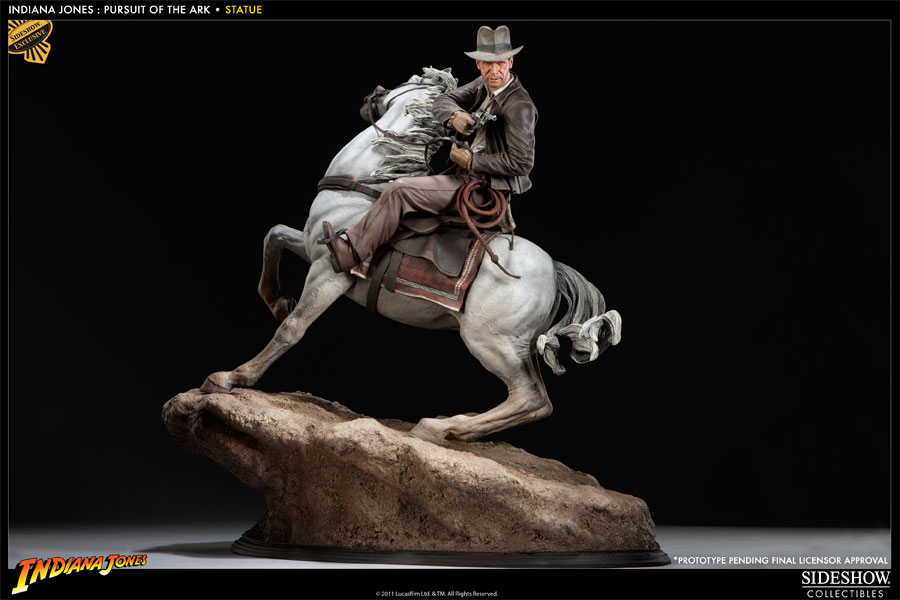 This is Sideshow’s 1:5 scale Indiana Jones ‘Pursuit of the Ark’ polystone statue. Based on the scene from Raiders of the Lost Ark, the Pursuit of the Ark statue is individually hand painted and finished with incomparable attention to detail.

This is a Sideshow exclusive version that includes a unique feature available nowhere else: Additional switch out hand holding pistol.

While his Third Reich continues its reign of terror, Adolf Hitler hunts for the mythical Ark of the Covenant, resting place of the Ten Commandments, said to have such supernatural powers that it can defeat entire armies.The U.S. government is racing to find the Ark before Hitler, and enlists the help of Dr. Henry Walton Indiana Jones, Jr., a professor of archaeology, with a penchant for adventure. Accepting the task, Indy travels to Patan, Nepal to reunite with the headstrong but beautiful Marion Ravenwood. Marion agrees to aid Indy’s cause, despite her obvious bitterness over their once failed love affair. Fleeing from the villainous Nazis, they journey to Cairo, where Marion falls victim to an attempt on Indy’s life. Indy also discovers that his nemesis, French grave robber, Belloq has been contracted by the Nazis to lead their quest for the Ark. Indiana Jones’ pursuit of the Ark will lead him into mortal peril, possibly true love, and he may just rescue humanity along the way

Becomes available June 2013. It may be a Limited Edition Indiana Jones collectible, however Sideshow have yet to release their decision on that (assume it is for now, just in case).