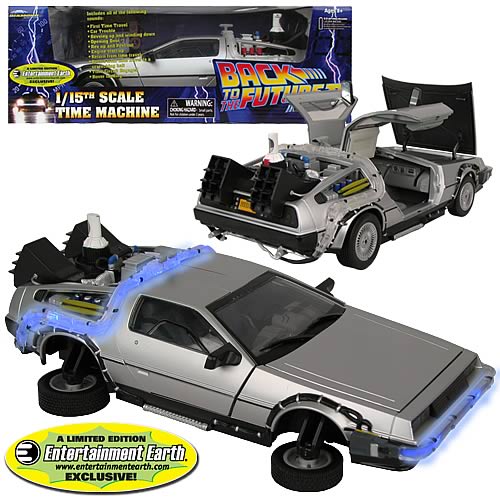 This is an Entertainment Earth exclusive release of Diamond Select’s 1:15 scale model of the DeLorean based on the car as it appears in the second film of director Robert Zemeckis’ Back to the Future Trilogy.

This version of the DeLorean has the 2015 hover conversion kit (which means the wheels pop for “flight mode”!).

The wheels spin, the doors open, and its plastic construction feels just like the toy you always wished you had.

Measures 13-inches long and is compatible with many 3 3/4-inch scale action figures (EE states they have tested several 3 3/4-inch scale action figures with the vehicle and have found that many fit in the driver’s and passenger’s seats with little to no difficulty, however unusually tall figures like Darth Vader and Chewbacca will not fit). Unfortunately there are no figures for Doc or Marty planned for release at this time.

Watch a video of the model:

Get it only at Entertainment Earth and only for $49: