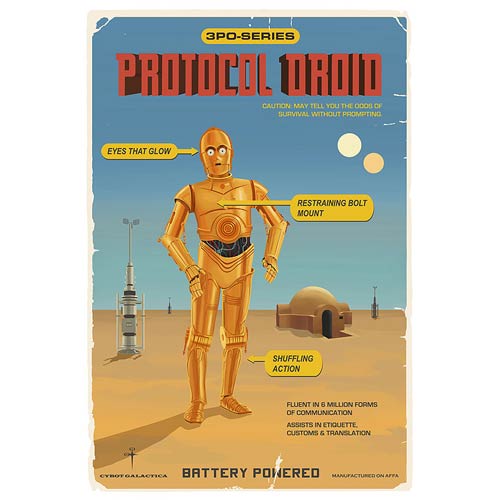 Set to be released in April 2013 is Acme Archives’ awesome retro-style poster paper giclee featuring an image of the C-3PO unit as it might have looked on a toy ad in the Star Wars universe.

This is a limited edition Star Wars poster paper giclee of only 150.

Each of the 150 units is hand-numbered and signed by the artist.

It calls out the key features of the “Battery Powered Protocol Droid,” with yellow arrows pointing to 3PO’s glowing eyes, shuffling action, and restraining bolt mount.

It even states that the C-3PO unit is “fluent in 6 million forms of communication, assists in etiquette, customs & translation,” and even says, “caution: may tell you the odds of survival without prompting!”

Includes a certificate of authenticity.

You can order right now at the link below for just $89: