In February 2014 Hot Toys will release their new sixth scale figure of ED-2O9 from the 1987 film Robocop.

I have to say, twenty six years later and ED-209 is still one of my all-time favorite robots!

Just like all Hot Toys’ gear, this is a highly detailed 1/6 scale figure that is sculpted with extreme movie accurate detail that conveys a dead-on likeness of the original crime prevention droid.

There have been a few ED-209’s released over the years (like the Hot Toys Deluxe Sixth Scale ED-209 released in 2006) but this one looks like being the cream of the crop. It includes superior articulation in the arms, legs and claws enabling improved simulation of the robot’s movements.

Plus, it comes with an interchangeable battle damaged arm.

ED-209 also features sound; he’ll say three quotes from the film in addition to sporting various other film derived sound effects. The quotes he says from the film are:

‘Please put down your weapon. You have 20 seconds to comply.’

‘You are in direct violation of Penal Code 1.13, Section 9. You have 5 seconds to comply. Four…three…two…one…I am now authorized to use physical force.’

That’s just so awesome! Back in 1987 when I was walking around the house chanting the above exact words in the deepest voice I could muster I would have done just about anything to own one of these! 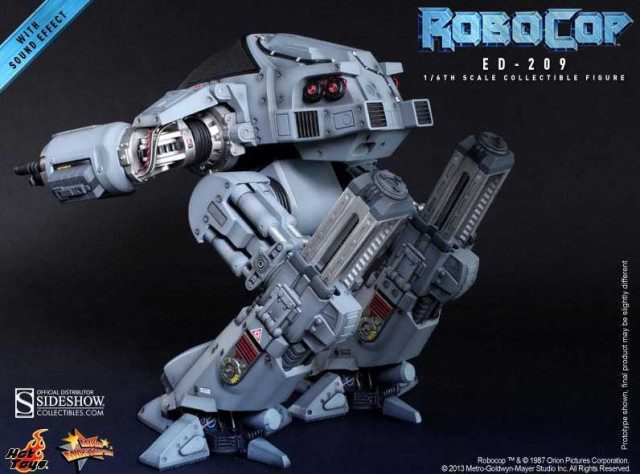 You can pre-order this awesome collectible now from the following links (prices vary):