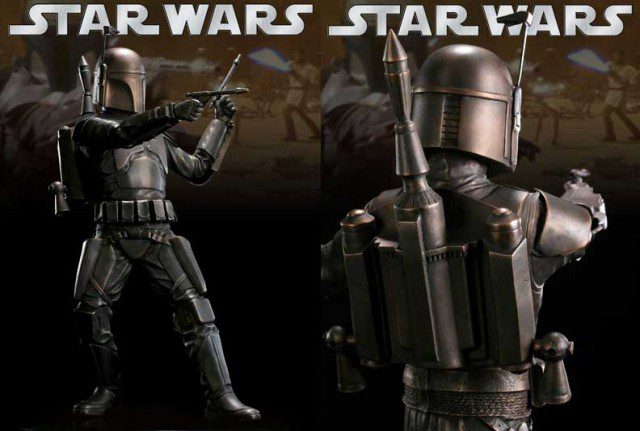 This is Sideshow’s limited edition (of 25) Bronze Jango Fett statues.

But not right now. Sideshow have placed a discounted special where collector’s can snap this up cheaper than the first 5 buyers did! At least for now, you can buy this awesome Star Wars collectible for only $4,199.99 – $300 off the present going price and more than $500 off the future slated price.

The name Fett carries with it a cold air of dread and competence. To those with the credits to hire him, it is synonymous with success. To those with reasons to fear, Fett means capture or death. The name and reputation are just two of the many things Boba inherited from his father, Jango. In the final years of the Republic, Jango Fett was regarded as the best bounty hunter in the galaxy. A proficient marksman and unarmed combatant, Fett was approached by a man named Tyranus about a decade prior to the outbreak of the Clone Wars. There, on the moons of Bogden, Tyranus offered an intriguing proposal. In exchange for a sizable fee, Jango would become the template of a clone army. Fett agreed, but with an unusual stipulation in his contract. In addition to his fee, he would be awarded an unaltered clone of himself. Unlike his other duplicates, this clone would not undergo growth acceleration or docility tampering. It would be a pure replica of Jango, whom he would name Boba and raise as his son.

The Jango Fett Bronze statue captures the legendary bounty hunter and origin of the clone army in exceptional 21″ tall detail.

This is definitely a serious Star Wars collector’s piece!

Grab it at a discount while you can (and check out a heap of images):