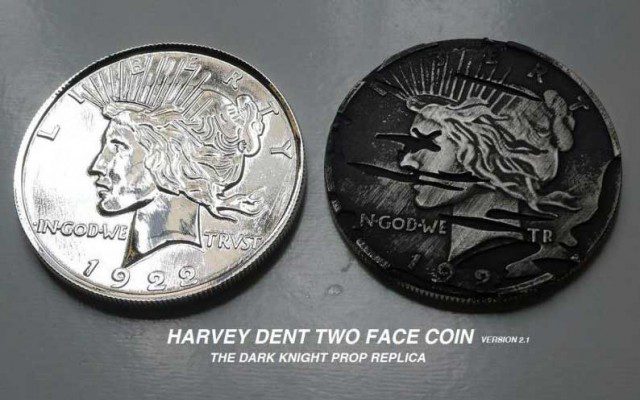 Check out this Two Face Coin Prop replica based on Harvey Dent’s coin as seen in The Dark Knight.

The coin is professionally cast in metal and plated. It measures 38mm x 3mm & is made with reference to an original 1922 peace coin. Like the original prop, this one is shiny and new on one side, and antique plated, scratch and weathered “burnt” on the other. The seller claims it has a nice weight & makes a nice sound when you spin it.

Now, the seller also claims it’s arguably one of the most screen accurate ever made having been modeled off the screen used coin that was on display at San Diego Comic Con in 2011. At first I was going to argue the point after looking at the following image of the coin that was on display in the DC Comics booth (via Pop Culture Geek) at SDCC 2011, because as you can plainly see it looks quite different even after taking into consideration the lighting variance: 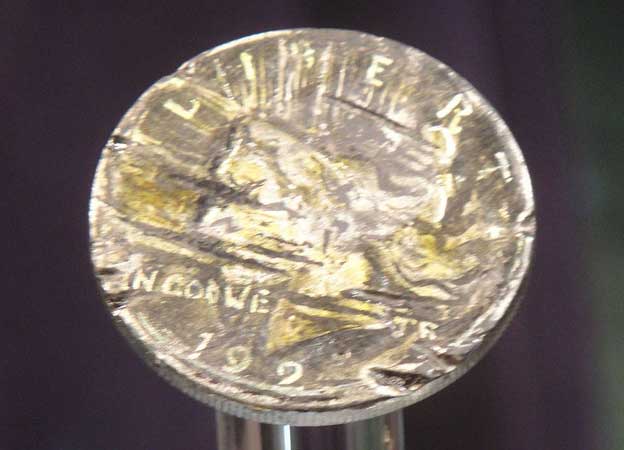 However, what it does look like it’s modeled off is this Two Face Silver Dollar Coin Replica:

In fact, it looks almost identical to the above, so much so that you would almost believe it’s the same product only more expertly weathered. It may in fact be just that. But even so, it is this latter point that is perhaps the most pertinent, since the above prop replica is considered by many to be the most screen accurate which, in turn, kind of substantiates the sellers claim since his is clearly more weathered than this one. 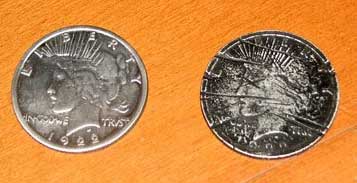 Further, it is significantly closer to the original prop than a number of other versions that are floating around, including officially licensed ones. Just compare it to these:

So I’m posting this because I’m going to agree that it is one of the most screen accurate prop replica’s around. The fact that it isn’t officially licensed just makes it a rare piece to own for any avid Dark Knight collector.

Get it at the link below: