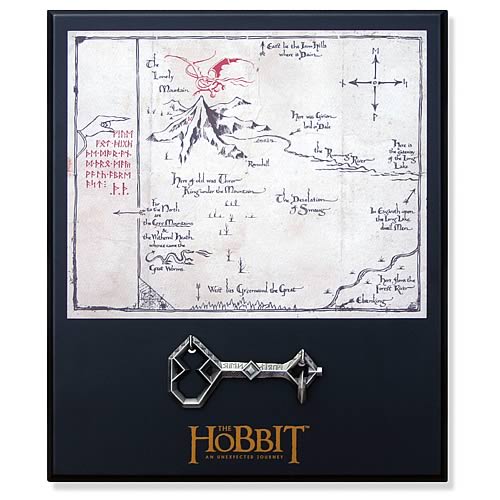 Peter Jackson’s new The Hobbit trilogy has just kicked off with the first movie, The Hobbit: An Unexpected Journey, being released in New Zealand. As these three films unfold, there’s little doubt that the prequel to Jackson’s The Lord of the Rings Trilogy

is going to spawn some pretty sought after collectibles.

The Hobbit Thorin Oakenshield’s Key and Map Prop Replica set is one of them as it is an authentic screen-accurate version of the dwarven leader’s map of Middle-earth and key to Smaug’s lair as it appears in the first film, The Hobbit: An Unexpected Journey.

Produced by the Noble Collection, this movie prop replica is provided on a display stand that measures 15-inches tall x 13-inches wide.

Though the movie is out in New Zealand, this collectible won’t become available until January 2013. Before then you can preorder it. The link you need is below where you’ll get it pretty cheaply: