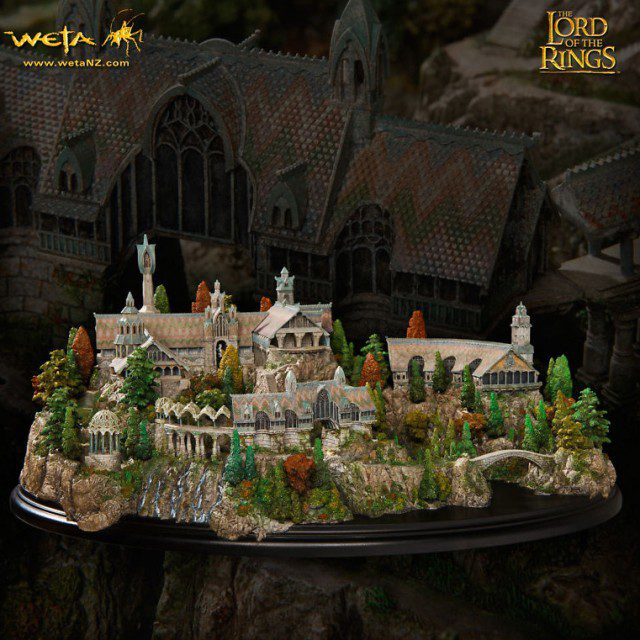 This is Weta Worskhop’s Rivendell Diorama Statue, reproducing the Rivendell environment as featured in The Lord of the Rings and The Hobbit: An Unexpected Journey.

This diorama is based on the miniature featured in The Lord of the Rings. It is built by the same artists and craftsmen who worked Peter Jackson’s epic films. The result is a stunningly detailed environment that evokes the serenity and peace of the House of Elrond.

This statue is the combined result of 14 artists and 1,200 hours of creativity and attention to detail. Every tree, every ornament, every brick was considered and produced to make up the whole.

Rivendell is by some margin the biggest of environments to feature in The Lord of the Rings.

Home to Elrond, Rivendell was founded in the year 1697 of the Second Age by the Elven Lord as a haven amid the growing darkness in the north of Middle-earth. Under the protection of Elrond’s Ring of Power Vilya, Rivendell was a sanctuary and meeting place for the forces of light and persisted in secrecy and security until the War of the Ring and the fall of Sauron, the enemy. There dwelt the Lady Arwen, and king in exile, Aragorn, came and went as he pleased. Bilbo Baggins called Rivendell home in his declining years, and often it hosted secret war councils and discussions among the leaders of the free peoples. The heirlooms of Middle-earth were gathered there in Elrond’s library: Narsil, the sword of Elendil that cut the Ring from Sauron’s hand, and Aiglos, the spear of Gil-Galad, among others. Imladris, the Last Homely House – the Elven settlement was known by many names, though its paths were shrouded in secrecy and enchantment. Perched among waterfalls in a hidden valley in the foothills of the Misty Mountains, Elrond’s home provided a safe haven for Thorin’s company during the quest for Erebor and Frodo’s party when they sought refuge from Sauron’s wraiths. It was at Elrond’s council in Rivendell that the Fellowship of the Ring was born and the quest to destroy the One began. Even beyond the end of the Third Age, when the Rings of Power were no more and Elrond had passed over the Sea, Rivendell remained, at least for a time, in the keeping of Elrond’s sons Elladan and Elrohir.

This awesome collectible is priced at $399.95, and can be purchased at the link below (where you can also view more images):

THE LORD OF THE RINGS Rivendell Diorama Statue (via Ebay)