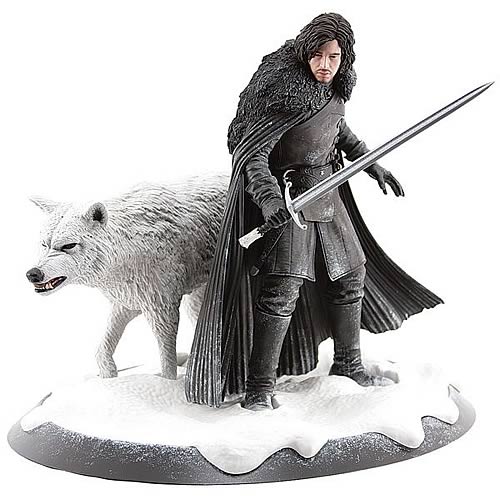 This is the new Dark Horse statue depicting Jon Snow (as played by actor Kit Harington) with his direwolf Ghost from HBO’s hit fantasy series Game of Thrones.

The spiritual bond between Eddard Stark’s illegitimate son Jon Snow and his direwolf companion Ghost is brought to life with this exquisite piece!

One quick glance at the statue and you’ll notice the quality right away, from Ghost’s snarl to the ruffles in Jon Snow’s armor and boots, and the base will have every fan of the HBO TV series Game of Thrones smiling, as it depicts Jon Snow trudging through the snow as a member of the Night’s Watch.

If you’re a fan of the TV show or the George R.R. Martin A Song of Ice and Fire book series (and how can you not be!) you’ll love adding this Jon Snow and Ghost Statue to your collection.